Popular
Male UltraCore Review – Should you buy Male...
Top 3 Acne-Causing Foods You Ought to Avoid
These 6 Frequently-Consumed Food and Beverages are Weakening...
Biomanix Review – Maximum-Strength Male Enhancement Goes Rogue
A Complete Rundown on Testosterone Supplements: Do they...
6 Things You Can Do to Begin Your...
Can CBD Help You Lose Weight? Here’s the...
Ultra Gold Review – Why Should You Buy...
Ayurveda for Weight Loss: A Primer
Causes, treatment, and prevention of atrial fibrillation (AFib)
Home Sex Sharing Chores Means More Sex for You
Sex

Are you looking to increase the sex in your life with your significant other? I think we all are. I want to meet the guy who’s like, “no thanks, I’m good,” when it comes to the amount of sex that they’re getting. Or maybe I don’t. I doubt we’d have much common ground. Are you also looking to give yourself incentive to pick up that broom and do some sweeping? To pick up that dish rag and clean those day old dishes in the sink? Hmm.. that seems less likely. But, once you read on, you might change your tune.

You see, studies have linked the sharing of household chores evenly between partners rather than along traditional gender norms with increased sex and sexual gratification. Here’s the thing, data has suggested for a while that the frequency of sex has decreased. And that’s not just because of the internet or the golden age of television. The decrease is global. But we’re not here to solve the world’s problems. We’re here to just get you laid more. 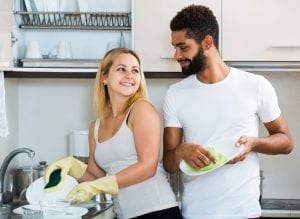 The traditional wisdom when it comes to domesticity and sex is that it’s actually better if you stay in your lane — splitting the chores down gender lines. The woman gets the cooking, the cleaning, the laundry. The man gets the handyman stuff, the plumbing, the repairs, the building, etc. The thinking behind this comes from that decrease in sexual activity. There was a lot more porking going on in the 1950’s when gender norms were enforced by societal expectations of what was considered masculine and what was considered feminine. Not that it applied to every case at the individual level, but the understanding was that the wife didn’t try to go build a set of bookshelves or replace the spark plugs on the family car. And the husband didn’t go around the house cleaning the windows or separating the laundry.  And because couples were getting it on more — there’s a correlation between more sex and the increased role of gender norms in their lives. But as we all should know by this point, correlation does not necessarily equal causation.

Just because two things are happening at the same time, does not mean that one is causing the other. New data, to go along with new gender norms and roles, show new trends. In fact, they show the absolute opposite occurring from the long-held beliefs. If a guy is better at the cooking and cleaning, and takes those on  Just because a guy isn’t fulfilling the “masculine” gender role in the chores around the house, doesn’t make him less masculine or sexually appealing.  The same goes for the gal. Just because the wife isn’t in the kitchen baking while she has the laundry going, and instead is under the car figuring out why the muffler is making that strange noise doesn’t make her less of a woman. And doesn’t make her any less sexually appealing either.

The bottom line is that empirical data supports that when a man does more than a third and up to half of the housework — traditionally thought of as the woman’s domain — the couples reported having more sex. In fact, these couples buck the global trend of decreased sexual activity entirely. Furthermore, and maybe even more importantly, these same couples reported being more satisfied with sex with their partner. If there is an imbalance, on either side — for the man or for the woman sharing more than their fair share of the load of chores — those couples reported having less sex, and being less satisfied with the outcome of their sexual activity. Less sexual satisfaction = less sex. 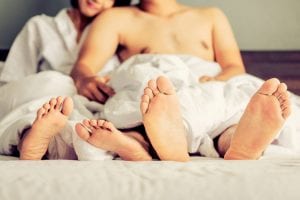 So, where is this coming from? Why is this shift happening? It’s about the perception of the fairness in the relationship, mainly. If the division of labor in household chores is broken down more fairly between both partners, then the partners are more likely to be satisfied with the fairness in there relationship, in general. And if you see your partner in a positive light, you’re going to want them more.

One of the theories on this is the short in the perception of the marriage being a union between two individuals who have a lot in common.  There used to be more division in marriage. There’s the old wives tale that opposites attract, for instance. If you have even a modicum of experience in relationships, you’ll know that’s not particularly true. For a relationship to work, there has to be some common ground (even if that’s the shared belief that oppositions do — in fact — attract). There are going to be differences in opinion, but you need some base, some foundation, to work with to build up from in order to have a healthy relationship.

For a marriage to work — for a relationship, for a partnership to work — you cannot wholly rely on the other individual to make up for your deficits. It’s more than that. You have to come together and work together. Marriage, in perception now, is about coming together and working to make up for each other’s weaknesses and becoming a stronger force together because of it. By more equally dividing the household chores, then you are showing an attractive shift toward equality. Dividing them based on what each person is better at, and making up for the deficiencies of your partner, is maybe the forefront of the battle for equality. And the data supports that equality is sexy.