Popular
Male UltraCore Review – Should you buy Male...
Top 3 Acne-Causing Foods You Ought to Avoid
These 6 Frequently-Consumed Food and Beverages are Weakening...
Biomanix Review – Maximum-Strength Male Enhancement Goes Rogue
A Complete Rundown on Testosterone Supplements: Do they...
6 Things You Can Do to Begin Your...
Can CBD Help You Lose Weight? Here’s the...
Ultra Gold Review – Why Should You Buy...
Ayurveda for Weight Loss: A Primer
Causes, treatment, and prevention of atrial fibrillation (AFib)
Home Sex Male Birth Control: History, Benefits, and Future Plans
Sex

Contents show
1 With a couple of exceptions, most forms of birth control are the woman’s responsibility – including Plan B, IUDS, hormonal injections, and birth control medications.
1.1 In the last century, studies revealed a correlation between low fertility rates in males and a chemical known as gossypol.
1.2 Scientists have tried to administer shots of testosterone to men in order to trick the brain into thinking it could temporarily stop producing any more testosterone.
1.3 Female birth control has similar effects on a woman’s mood, but to a slightly lesser extent than the testosterone injections.
2 Newer research continues to show hope.
2.1 A hormonal option – known as combination male hormonal contraceptives (MHC) – shows more promise than past hormonal options.

With a couple of exceptions, most forms of birth control are the woman’s responsibility – including Plan B, IUDS, hormonal injections, and birth control medications.

Previous attempts to develop male contraception have failed. Because unlike with most female forms of birth control, clinical trials demonstrated that male contraception often resulted in negative side effects; especially long term infertility. However, newer research shows more promising results. So the prospects are bright for men who might want to just take a pill to avoid an unplanned pregnancy.

Previous attempts at creating male contraception revolved around trying to target male hormones associated with sperm production. All of these attempts have failed because of serious side effects associated with the drugs.

In the last century, studies revealed a correlation between low fertility rates in males and a chemical known as gossypol.

In the 1970s, the Chinese government tried to see if gossypol could work as a contraception. It did actually work, but it also caused low blood potassium levels. People suffering from low blood potassium often experience fatigue, muscle weakness, and even paralysis. Other detrimental side effects included digestive problems, exhaustion, and long term or permanent infertility.

Throughout history, different chemicals continued to prove their efficacy in acting as male birth control. Only to also produce too many negative side effects. Triptolide, for example, a chemical that comes from certain vines, was shown to effectively target the seminiferous tubules and prevent an unplanned pregnancy. However, it produced permanent infertility. Gamendazole, a derivative of lonidamine (which has interesting effects on decreasing cellular respiration in cancer cells), caused temporary infertility by targeting sertoli cells. But it also could cause liver inflammation and muscle atrophy. 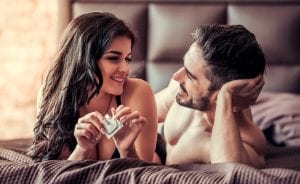 Scientists have tried to administer shots of testosterone to men in order to trick the brain into thinking it could temporarily stop producing any more testosterone.

The idea is that once the brain detected the increase in testosterone, it would halt the testicle’s production of sperm. This type of hormonal contraception for men has been a popular hypothesis for a very long time; since similar methods seem to work for women. But clinical trials are rarely successful and are often terminated. A more recent clinical trial did seem to work without inducing permanent infertility. But it still resulted in adverse side effects such as suicide, depression, and mood disorders.

Female birth control has similar effects on a woman’s mood, but to a slightly lesser extent than the testosterone injections.

Additionally, female birth control was developed at a time when the World Health Organization and the FDA were far less concerned about any side effects relating to mental health. Therefore, scientists were not compelled to terminate trials because of mood changes. Women were also much more prepared to risk experiencing mood changes because contraception was extremely unique and effective.

Today, many researchers across the globe are still conducting research regarding the possibility of using hormone injections and other chemicals to induce infertility in men. Scientists have been persistent because of all the potential benefits of a male alternative to the pill. These benefits include the ability to remove some of the burden away from a female partner. The prevention of too much of an increase in the world population, the reduction of unintended pregnancy rates. And the possibility that some form of male contraception can be a birth control option accepted by religious communities; that have been traditionally unaccepting of many forms of female birth control.

Additionally, many current forms of male birth control are either unreliable (such as the withdrawal method and the lunar tracking method) or permanent (such as a vasectomy). Only the condom is an effective short term method of male contraception. But many religious communities have also rejected the use of a condom. The condom also poses some environmental risks since they often fill up landfills.

A 2017 study, for example, theorized that specific types of either audible sound waves, ultrasonic sound waves, or a combination of both could potentially induce spermicide. Certain sound and vibration frequencies are known to inhibit sperm maneuverability. So manipulating these frequencies could decrease a sperm’s ability to stay alive for more than 74 days.

The same study also suggested that exposing testicles to heat could also prevent sperm production. They believed heat could work because sperm are very vulnerable to hot environments. And they are ideally produced in colder temperatures. 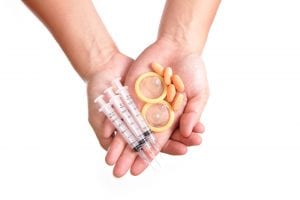 Other researchers are looking into Vasalgel, a procedure that uses a liquid substance that turns into a solid once injected into men. The solidified substance can be used to physically block sperm transport for a temporary period of time. While Vasalgel has faced a few controversies over the years regarding clinical trials that had adverse effects on the male renal system, research on it persists. Unfortunately, since it does require an injection into the vas deferens, it will likely be met with resistance among many men. However, proving that it works is the first step to trying to develop a pill version of it that will probably be met with less resistance.

Combination MHC is testosterone mixed with other hormones such gonadotropin releasing hormone and a synthetic hormone called progestin. Most of the hormones involved reduce sperm production when working alone, but when combined, it works faster and more effectively. Additionally, by mixing testosterone with other chemicals, the concentration of testosterone goes down; which could prevent many of the negative side effects associated with earlier attempts to use testosterone by itself.

Most studies have demonstrated that men often show a more positive response to the option of hormonal male contraception than they do towards other potential techniques. But it largely depends on cultural backgrounds. The future shows a wide array of possibilities and any technique that proves effective is likely to be very marketable. After all, many men agree that it is about time that they play a role in helping to prevent unintended pregnancies.

10 Movies That Will Spark Your Ambition